The problem is, that’s much easier said than done. The current way we approach agriculture and food production in the western world is super inefficient and not sustainable for the long term.

If we attempt to feed that many people with our current methods, it would not be a pretty situation. We’d run out of resources and destroy our environment in the process.

To preface, we currently produce enough food to theoretically feed ten billion individuals. The problem is, we waste so much of it that this isn’t what realistically happens.

For instance, in the United States, although 1 in 8 households suffer from food insecurity, while 40% of the national food supply goes to waste.

However, the likelihood that we’ll be able to stop wasting food completely is little to none, and either way, our food production systems we currently use are begging for improvement:

… The stats go on and on, raising a TON of questions regarding it’s sustainability, ethicality, and overall efficiency. To put it bluntly, our approach to agriculture right now sucks.

The implications are clear. In order to feed 10 billion people in a nutritional way and not destroy our environment in the process, we need to make a change. So, what technologies and techniques can we employ in order to make this a reality?

From 🌱 to 🌲: How Are We Actually Going to Produce Our Food?

The process of growing food can get pretty complex, especially when you’re considering something like obtaining protein.

That being said, there are currently a lot of interesting ideas being laid out concerning how we can change our approach to food, all with their own respective pros and cons. However, in general, these solutions offer the promise of a cleaner and more nutritious future.

It’s also important to note that meat production uses the most energy and resources in conventional farming. As a result of this and our growing population, our two diet options are to either shift over to a plant/fungi-based diet or completely reinvent the way we approach protein.

However, the following ideas can be combined to find a balance of both choices 😉.

* I’ve written about vertical farming before. If you want to get a deeper look into what exactly this entails, click here 🙂

Vertical farming is the practice of growing crops in vertically stacked layers. It takes in controlled environment agriculture, and soilless farming techniques like hydroponics, aeroponics, and aquaponics to produce nutritious yields of food. Through this, we’re able to get more food per square foot of land. In addition:

That being said, it isn’t perfect. Vertical farming takes up monumental amounts of energy (since we’re growing crops indoors), has very high startup costs (taking around 6–7 years to pay pack the initial investment), and is not suitable for all crops to grow in.

However, if further development is put into this, it is possible that we will be able to overcome these hurdles, or at least make vertical farming more accessible.

If you took a look at the statistics at the beginning of this article, you might have noticed that meat from animals contributed largely to the impact that agriculture had on the environment.

The problem is, meat has become super integrated into our lives, and there’s no way that everyone would be able to just quit cold-turkey (haha pun intended) without any complaints.

Rather than forcing individuals to completely shift away from meat, we can produce burgers and other typical meat products from plant sources, like chickpeas.

Beyond Meat is a company that creates ‘meat’ products from plant sources. Their burger is made of a variety of ingredients, however, most of the protein comes from the legumes integrated into their recipe.

However, plant-based meat doesn’t exactly feel like the meat we’ve grown used to consuming. Animals contain muscle cells, which are naturally springy and flexible in order to help them move around. This is why meat often comes off as chewy.

However, plants never needed to really move around, and so, their cells are rather rigid and lack flexibility. This is the reason why sometimes when plant based meat is consumed, it’ll come off as a bit mushy or crumbly.

That being said, plant based meat is more environmentally sustainable and can improve the health of those consuming it over traditional meat.

In regards to the environment, when compared to ¼ pound of traditional U.S. beef, plant-based proteins emit 90% less greenhouse gas emissions, require 45% less energy, have a 99% less impact on water scarcity, and use 93% less land.

Have you ever walked into a forest, noticed some mushrooms, and contemplated whether or not you could eat them?

With mycology, we’re studying fungi, but, we’re also looking at how mushrooms impact us as humans.

Well, although some mushrooms are definitely poisonous and not meant for human consumption, mushrooms and fungi are jam-packed with nutrients and basically have everything we need to survive:

Fungi is found in varying levels of acidity and is pretty easy to grow. It’s significantly faster than growing crops and has a smaller impact than growing meat.

However, fungi-based diets are generally low calorie. This means that we likely would need to consume some additional source of nutrition in order to help meet our daily caloric intake needs.

Note: Fungi is also entering the meat start-up space. In 2020, start-up Emery Foods announced that they would be producing fungi-based steaks, and are currently the leading start-up working on optimizing off of fungi and meat.

What if, rather than growing animals from birth and slaughtering them, we were able to grow proteins from stem cells?

Although it sounds super futuristic, this is an actual possibility, and something that’s already been done!

Cultured protein is protein produced by the in vitro cell culture of animal (typically 🐮 bovine, 🐷 porcine, or 🐦avian) cells.

Animals are raised from birth and their stem cells are extracted. In mammalian cell culture, embryonic stem cells are typically used, meaning the meat we grow comes from the embryos of pregnant animals.

In order for the cell to grow and proliferate, a growth medium is given to the stem cell. These contain a variety of amino acids, inorganic salts, sugars, and growth factors that help the cell thrive. However, in order for the medium to be effective, it usually has to be supplemented with something additional.

Generally, for mammalian cell culture, we use serum made from animal blood or recombinant growth factors, however, this is expensive and brings up questions concerning the ethics of cultured meat.

But, there’s a solution to this. Rather than using bovine, avian, or porcine stem cells in order to grow meat, we could actually use insect stem cells to grow proteins! The media used to help grow protein from insect cells does not necessarily require an animal serum or recombinant growth factors, meaning the cost is driven down, while the ethicality of the process goes up.

Insects, when compared to traditional meat, are much more nutritious. Although all bugs vary in nutritional quality, for 100 g of crickets (crickets in general, not cultivated protein):

However, even though they have a multitude of benefits, most people in the western world shudder when they hear the term ‘insect meat’.

Since eating lab grown protein from insect cells is not the same as eating insects in the traditional way they’re cooked, this may help us get over some hurdles concerning consumer bias.

However, once we get past the steps of growing the protein, with most insect and animal-cell based protein scaffolding is required.

This helps the final product mimic the texture of conventional meat in addition to supporting changes in the product’s size (ex. helping a meat patty be the size of a pound of steak rather than something smaller).

Although the texture is not 100% accurate right now, with enough effort put towards the cellular agriculture effort, it is likely that this could be very feasible.

In regards to taste, insect and animal-based proteins are designed to mimic the taste of their respective sources. But what about the cost?

Right now, it’s pretty expensive to grow cultured meat. The media themselves are expensive, and the R&D costs help add to the price of actually growing protein itself. This paper by the Good Food Institute in 2017 analyzed how we could potentially cut down the cost of Essential 8 TM, a popular media. Note how the two recombinant growth factors are immensely expensive and lead to the price being almost $400/L

That being said, there are various approaches we could take to take the cost of media down to an amount that is equivalent to that of the production of conventional meat. The media used for the production of insect-cell based proteins is also significantly cheaper than that of the animal-cell alternative. Since recombinant proteins are not used, the media itself is cheaper. However, this does not mean that insect-based protein is cheaper as of yet.

The cell density of insect cells is smaller than that of animal cells, and so, when we grow proteins, there generally ends up being less than that of what would have been produced with animal cells.

There’s still a lot of progress that needs to be regarding how we could further cut down the cost for the media and process in both insect-cell based and mammalian-cell culture, however, it does have the potential to one day match that of conventional meat production.

However, some researchers believe that the high levels of energy required for producing lab grown foods will actually have worse of an impact on the environment and our warming climate. Unfortunately, not enough is known about the impact of lab-grown foods to give a fully concrete opinion leaning towards one side.

There are a lot of ways we could consider reinventing agriculture in order to feed such a large population.

But, it all starts with us.

Without creating a significant change to the way we approach food, we’ll lead ourselves into a disaster we can’t escape.

Being conscious of how we’re approaching our food right now and how we can change this is step one. But actually choosing to research, purchase, or invest into these alternative diets is a key step we all need to take in order to ensure food security in the future.

👋 Hey! If you liked my article and would like to read more of my work, feel free to follow me on Medium! I’m also always thankful to hear feedback so, if you would like to get in contact with me (I don’t bite, shoot me a message!), connect with me on LinkedIn! 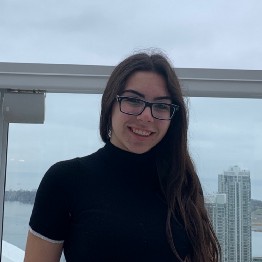 Victoria Dmitruczyk is currently diving into the intersection of AI, energy, and cellular agriculture. Now, for a pun. What’s a wind turbine’s favourite colour? Blew.