Highlights from the archive of audience-submitted questions

tl;dr — check out the archive of Slido submissions in this google sheet and review the official Slido interaction report here. 🎤🤳 Snapshot of Slido submissions during Deb Arcoleo’s presentation on transparency in cellular agriculture. Cory’s question, highlighted, ended up being the most popular question of the entire conference. Major props to our photographer for being so prescient as to choose this moment to take his only photo of just the Slido screen. You can view the rest of his photos here. David Chuchuca

On July 19 and 20, over 300 New Harvest community members gathered at the MIT Media Lab in Boston for our fourth annual conference.

Our MC, Kristin, gave them the following instructions

Take out your phones (yes, seriously do it! I want to see everyone’s phone out 📲) → Go to www.slido.com → Insert code #NewHarvest2019

From there, attendees (including those live streaming from home) could submit questions throughout speakers’ presentations for the subsequent Q&A. This feed was projected and updated in real time on stage as people upvoted and downvoted each other’s questions. We’ve been using Slido since our very first conference in 2016. Each year the tool gets better and better. This time, they added a downvoting function, customizable color scheme, and a way to embed our live stream within Slido itself.

After the event, Slido provided us with an archive of the questions and visualized analytics.

This is what stood out to us! Every question that appeared on the screen was manually approved by Camila, our amazing Slido rep. She monitored the incoming stream of questions, rejecting only those which were duplicates, distracting, or felt malicious.

A total of four laptops were used to toggle between the PowerPoint slides and Slido feed. The AV team — led by the appropriately-named Steve Sargant — demanded that we always have a backup ready to go in the event of any glitch. We appreciated Steve’s rigor when we did, in fact, have a glitch during a presentation which was rendered virtually undetectable by the audience thanks to the four laptop setup.

Two of the four laptops are shown below, in the Slido corner of a long AV table. Camila wore a headset to communicate with Steve at the other end!

Slido was a huge success 👏

As we knew it would be! Thank you to Camila, Alex, the entire AV team, and volunteers Vikram and Quinn for making it happen.

“I go to conferences every other week and I’ve never seen an audience this engaged.” — Camila 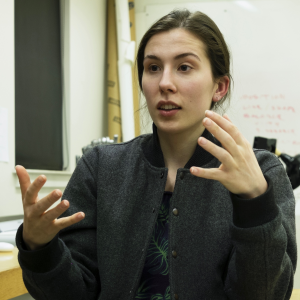