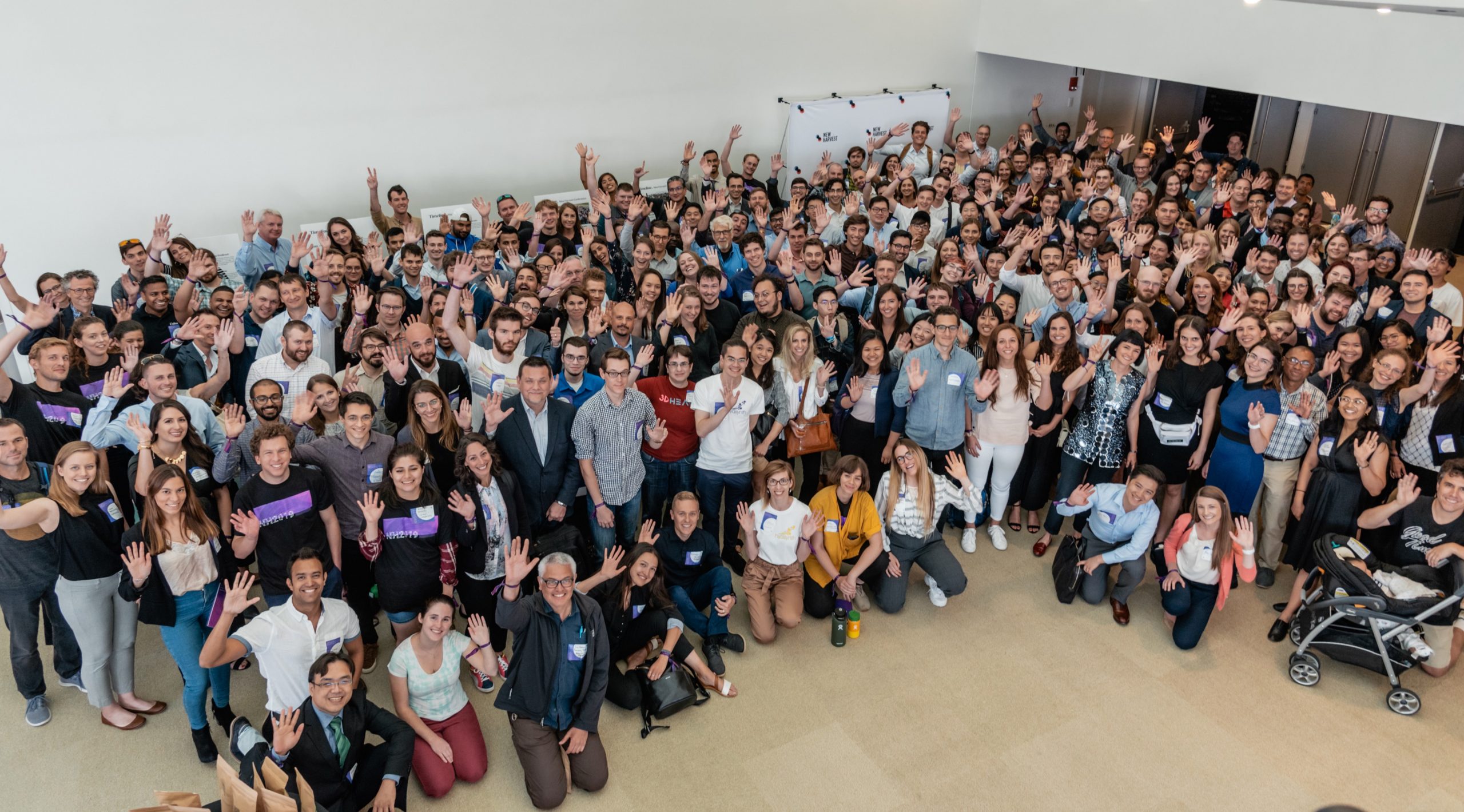 While a heatwave had struck the northeast United States and most were seeking shelter in air-conditioned havens, I was en route to meet with top scientists, brilliant entrepreneurs, and numerous others like myself who were all excited about one burgeoning technology that could not only bring comfort, but also change the world: cellular agriculture.

I hoped anxiously during my four-hour trip from Vermont to Cambridge, Massachusetts that there would be AC at my destination. Yet, as important as it was, it was still near the bottom of what I was eager to discover at the 2019 New Harvest Conference.

As I walked up the stairs of the MIT Media Lab on the conference’s first day, I was in awe of the sleek, modern, aesthetic of the structure. The floors gleaming, students were busy at work, and guests of New Harvest were crowding around a registration table. All were excited to see what sort of exhibitions, talks, and people awaited them on the sixth floor. Everyone donned purple wristbands — not unlike those you would receive at a music festival — and while the subject matter of this event was of the less boisterous kind, I felt a similar level of excitement. As we all sat awaiting the first presentations, I scanned the audience and saw a sea of enthusiastic faces. Soon, the audience collectively began to simmer down as Isha Datar, Executive Director, gave her opening statements.

The first few talks were given by New Harvest Fellows, a group of students who study cellular agriculture with the help of New Harvest funding. Santiago Campuzano’s research had him playing a version of laboratory Grocery Games. He tested several items from the produce aisle to find the vegetable which best allowed the formation of aligned muscle tissue when used as a scaffold and could potentially create the tender, fibrous, texture we seek in meat. He settled on celery, even imploring the audience to admire it a little more (though ironically, he dislikes its flavor) during his closing remarks. Following him was Scott Allan, who has been working on bioreactor technology. He showed the audience how much more efficient hollow-fiber bioreactors are than traditional stirred-tanks, at least for the purposes of mammalian cell culture. Allan mentioned that part of his project regards end-of-life of materials that go into cellular agriculture. A focus on sustainability is part of why we need cellular agriculture in the first place, and I am glad that researchers like him prioritize it in their work. The final New Harvest Fellow was Natalie Rubio, who threw a curveball into the conference: entomoculture. This term — which she coined — is defined as the growth of insect cells in lab conditions and, eventually, for consumption by humans. Her intuition quickly led her to address the first concern on people’s minds: If so many Westerners are already disgusted by eating insects, and some might even be opposed to eating cell-based meat, why would anyone eat cell-based insect meat? Rubio stated that we don’t need to think about eating a pile of insect cells, but that we can potentially replace the bovine tissue in a steak with insect-based equivalents. Perhaps one day we will be buying bug-based T-bones at the supermarket!

After the first round of presentations finished up, conference goers were on a cell-ag high and excited to peruse the various exhibitions during the first coffee break. Among the exhibitors were the 3D bioprinting companies Cellink and 3D Cultures, biotechnology firms Hyasynth Bio and C16 Biosciences, which focused on fermentation to ‘brew’ cannabinoids and palm oil, respectively, and a particularly pungent yet intriguing display of living fungi by Smallhold. Newly caffeinated, everyone began to shuffle back into the presentation hall. The second batch of presentations featured talks on the lesser-known complexities of starting and running a cellular agriculture start-up, from funding to consumer engagement. Dr. Geraldine Paulus acknowledged that cellular agriculture is a field straddling both the biomedical and the agricultural industries, and new companies may have difficulty finding investors or grants from either field. Her venture fund, The Engine, seeks to give these companies a space to grow, offering infrastructure, experience, and appropriate timelines.

Next was Deb Arcoleo, who works in corporate transparency at Transparency Ventures, and was arguably the first director of product transparency at a major US company (in her case, Hershey!). Foreseeing some difficulty in public acceptance of cellular agriculture, Arcoleo argued that industry leaders must be honest with consumers, as an overly perfect image often raises more red flags than it does lower them. The next round of presentations looked at the engineering, digital, and automation technologies being used within cellular agriculture. There was a heavy focus on how bioreactor automation should, or even must, be used to help this industry see the scale-up that it needs to create a major impact. Within cell culture is an intense complexity of parameters, and this group of engineers believed that automation and machine learning will allow us to optimize them. Scaling bioprocess is viewed as integral to the very purpose of cellular agriculture, which, of course, is to provide sustainable food that is also affordable and accessible.

Following another short coffee break, presenters from the world of seafood were ready to take the stage. Lou Cooperhouse, co-founder, president, and CEO of BlueNalu, a cellular aquaculture company, spoke of his long-term vision for his and other cell-based meat companies, even showing illustrated mock-ups of what these facilities might look like. Following Cooperhouse, Dr. Timothy Sullivan, a researcher at Gloucester Marine Genomics Institute discussed the long-term decline of the cod fishery in Massachusetts and how genomics research can help create a more sustainable future for fishery management. Interestingly, many of the Slido questions asked if there is room to retrain fishers who are losing business in traditional fisheries to become geneticists, molecular biologists, or perhaps even future cellular agriculturalists. Dr. Sullivan said that work is being done with fishermen to collaborate on genomics projects and that there may be more educational opportunities in the future. The final presentater of the first day was Dr. Keith Cox of Seafood Analytics, and he discussed a new technology which has a multitude of uses in food research. By analyzing the electrical impedance of food, we can read out various metrics such as nutritional composition, condition, and even cell degradation. Dr. Cox is excited about the future uses of this technology, and when I spoke with him during the exhibition, he said it can be used on anything ranging from meat, to avocados, even to beer!

With the first day’s talks wrapped up, everyone congregated into the exhibition hall for a group photo and happy hour. Students were invited to head over to Clover Food Labs for a Q&A session with New Harvest Research Director Dr. Kate Krueger about the New Harvest Fellowship Program. As everyone chilled out, socialized, or retired for the night, we all prepared for another day of exciting talks and panel discussions. Day two started off with some discussion on the regulatory landscape of cell-based foods. For the first panel discussion, Dr. Eric Schulze of Memphis Meats moderated the speakers which consisted of Brian P. Sylvester, special counsel at Foley & Lardner LLP, and Rohini Banskota, director of policy at Finless Foods. All of the above were extremely well-versed in the regulatory process within the food industry, and tackled subjects such as what it takes to be considered Generally Recognized as Safe (GRAS), labeling debates on what is legally considered “meat” or “milk”, and challenges of regulating cell-based pet food. The next panel brought together voices from around the globe to discuss how cellular agriculture is faring on a worldwide perspective. Representing the Americas was Alex Shirazi, host of the Cultured Meat and Future Food Podcast, Dr. Ka Yi Ling of Shiok Meats represented Singapore, Jonathan Breemhaar of Mosa Meats represented Europe, Dr. Nick Beaumont of Heuros represented Australia and Oceania, Shir Friedman of SuperMeat represented Israel, and Lisa Feria of Stray Dog Capital moderated the panel. While this cellular agriculture all-star team could probably keep an audience engaged for an entire day’s worth of discussion, we were unfortunately limited to an hour and a half.

Topics touched upon were government regulation being at various stages in the different regions, suggestions for start-ups to cater their products to their regions tastes, and one of the biggest questions out there (posed by Alex Shirazi) …has Fetal Bovine Serum-free media been figured out? Shirazi struck an excellent point about how many start-ups claim to have ‘figured out’ cheap, sustainable, and ethically sourced media, but due to their proprietary nature, these proclamations are difficult to validate currently. It becomes a difficult decision to form a media-research coalition when proprietary formulations can be used as leverage to attract investors. The panel touched upon some heavy-hitting questions but left off on a hopeful note: cell-based meat is already widely considered kosher! Our last panel of the conference was especially geared toward those who are seeking an entryway into cellular agriculture. The panel of technical founders, non-technical founders, scientists, and New Harvest staff emphasized the multidisciplinary nature of this budding field. There were varying perspectives on obtaining PhD’s versus diving into industry work, the need for marketers and designers, and building a professional community around cellular agriculture, but each panel member seemed hopeful for the inclusiveness of this industry.

New Harvest 2019 only had two speakers left, but they were ready to let the conference go out with a bang by bringing up subjects in much need of discussion: the critiques of cellular agriculture and a recap of the industry’s past twenty years. Dr. Garret Broad led a talk on critiques of the industry, and how we can better communicate our ideas for the future of food with the public. For cellular agriculture to truly affect the global masses, it must first be accepted, but then also distributed equitably. Broad stated that we can work towards food justice by not simply assuming the public doesn’t understand our tech, but that we must learn why the public might be concerned about cellular agriculture in the first place.

The final talk of the evening was given by Dr. Neil Stephens, a social science expert that has been tracking cultured meat for over a decade. He took us on a nostalgic, yet forward-looking journey through the years, starting with the first lab-grown goldfish tissue, through to Dr. Mark Post’s unveiling of the world’s first cultured hamburger, and onto our current new wave of start-ups and public research. These are the major milestones within their respective phases, and I can confidently say that we in the audience were all excited to see what the future has in store for our nascent field.

With new connections made, delicious snacks discovered, and a slew of papers to read, I parted ways with the MIT Media Lab. However, I wasn’t completely down, as many of us conference-goers were making an exodus to Cambridge Brewing Company to share drinks with colleagues and friends. Some old, but many new. New Harvest Note: Thanks to David Chuchuca for the photos! You can view all the conference photos here and add your own here.