AquaAdvantage is a salmon, developed by AquaBounty Inc., that has been genetically enhanced to grow more quickly in order to reach market size quicker than conventional salmon.  On November 19, 2015, AquaBounty announced that it had received approval from the U.S. FDA for production, sale, and human consumption.

Last month, CUESA – the Center for Urban Education about Sustainable Agriculture held an event in San Francisco to discuss the implications of what this approval may have on wild salmon populations, consumers, and fishermen, as well as Center for Food Safety’s pending lawsuit against the FDA in attempt to prevent AquaAdvantage from hitting the market.  I thought this would be a good opportunity to learn about public perception of genetically engineered food, and what we might expect the reaction to be when cultured animal products are ready to hit the market.

I was apprehensive about attending this event, expecting the crowd to consist mainly of adamant opponents of unconventional foods, but this was definitely not the case.  One of the opening remarks was that whether we like it or not, we all eat genetically modified food, so how do we deal with this? I strongly encourage people to visit CUESA’s website to listen to the audio recording of this event as a number of interesting conversations took place, but I’ll share my main takeaways from this event, in hopes that it might provide some insights for innovators of new and controversial technologies on some of the perspectives that they may encounter.

Moderator Twilight Greenaway, Managing Editor of Civil Eats, introduced the topic and then summarized some advocate claims: a) AquaAdvantage is farmed in closed containers which allows for waste containment and water recycling, and b) like all fish farming, AquaAdvantage can potentially take pressure off of wild fish stock, especially since they have been genetically modified so that they require only half the amount of growth time. Opponents’ arguments are that the FDA did not evaluate the fish’s safety rigorously enough, nor did they thoroughly consider all of the potential associated risks, and there is the concern that AquaAdvantage will lead to privatization of salmon genome which can force salmon farmers to be dependent upon a single company, similar to corn and soy farming.

What AquaBounty and the FDA did wrong, or what didn’t they do?

Then we delved into the lawsuit, and why the FDA should not have approved AquaAdvantage.  Adam Keats, Senior Attorney for Center for Food Safety, the organization filing suit to block the AquAdvantage, presented the legal basis for the lawsuit that they intend to file, and which is expected to set the precedent for environmental review and legal compliance of GE foods:

1)     FDA Classification & Legal Authority: the FDA classified the gene that is inserted into the AquaBounty Salmon as a drug, and assessed the gene’s effects on the fish rather than treating the fish as a food.  Adam gave examples of GE ‘farmaceutical’ cases where they consider this classification to be appropriate, such as anticoagulant producing goats, enzyme replacement producing chickens, and drug producing rabbits, but stressed that in these cases the animals are harvested for their drugs and then disposed of rather than eaten.

2)     Information Sharing & Transparency: Adam went on to describe other GE animals that have been developed such as livestock animals that don’t require de-horning or castration, and hogs with less noxious excrement, cautioning that there are likely many more GE animals being commercialized, and that a major complaint his organization has is that this information is not shared with the public, and that they have no knowledge of such potential animals until after the approval has been made. AquaBounty did voluntarily hold a public hearing, but apparently cherry-picked the information.

3)     Scope of Review: the FDA evaluated the safety of the fish – how it is affected by the drug and whether it is safe to eat, but did not analyze its potential effects on the environment, such as whether it may pose a threat to wild salmon.

Why Are We Doing This?

Peter Bridson, founder of Seagreen Research and former Aquaculture Manager for the Monterey Bay Aquarium’s Seafood Watch program then gave his two cents, essentially echoing Adam’s key points that the environmental impacts were inadequately assessed, and then raised the bioethical concern of what is it, do we really need GE salmon, and will it actually better society?  AquaBounty claims that AquaAdvantage salmon can reduce waste and water consumption just as producers of Enviropig claim that less noxious excrement will reduce water contamination.  However, it sounds like the public is skeptical that there might be real benefits aside from increasing profit margins.

Maggie Ostdahl, Sustainable Initiatives Manager for Aquarium of the Bay and coordinator of the San Francisco Bay Area Sustainable Seafood Alliance, spoke mainly about society’s habits and preferences, expressing that in general people need to incorporate more diversity into their diets, and that GE fish-farming will only further enable the unhealthy demand on certain domesticated and unsustainable animals and crops that in turn contribute to the eradication of other species.  I think that this is like saying that we all need to ride our bikes and walk more rather than develop renewable fuels or alternative energies.  While I agree that people do need to be less wasteful and more eco-conscious, certain industries, commodities, and preferences are not going to be eliminated anytime soon.

Additional concerns expressed by Hans Haveman, fisherman and owner of H and H Fresh Fish, were on how GE salmon might affect the fishing industry as a whole, and how it could make independent fishermen who use sustainable practices unable to compete.  He also brought up the point that fish farming competes with feed sources, and if AquaSalmon eat twice as much than normal, then this could have an even stronger impact on ocean feed sources.

Further discussion questioned whether many of the complaints and concerns were about fish-farming in general, and not specific to genetic engineering, though the consensus seemed to be that there is not a critical need for genetically engineered food to save wild salmon populations as claimed by AquaBounty.

So How Do We Really Feel About Things?

So this left the issue of whether there was a genuine need for GE food, and how we really feel about it. The Q&A section session starts roughly 1 hour and 19 minutes into the recording.  I grabbed the microphone and addressed the panelist at the first chance that I found.  Hans had mentioned how difficult it had become to access lobsters in California due to the insatiable overseas demand for it, so I referred to this and asked (paraphrasing): “If this conversation was about GE lobster, or something for which you felt there was a need for, then would you be open to genetic engineering?” To my disappointment, the response that I received from the panelists essentially: No.  We don’t like the idea of genetic engineering and doubt that it could genuinely be beneficial or needed.  However, Adam did mention that we shouldn’t completely close the doors to genetically engineering animals because as in the case of pharmaceuticals, they can be useful.

This led me to my next question, which was “So how do we feel about genetically engineered food products such as milk, eggs, and meat without the animals?”  You can hear the chuckles in the background of the recording, and call me crazy, but I honestly expected the panelists to respond with positive enthusiasm, but I was met once again met with some flippant remarks about how this really didn’t seem necessary for humans or society.  Well what if animals need this?

Twilight did interject to express that she found the idea of meat and milk production without inhumane farming processes to be a compelling idea and interesting conversation, though she wasn’t ready to personally advocate this.  Essentially, I gathered that these ideas and technologies are too new for people to really think seriously or critically about.

Additional questions from the audience probed whether there were additional nutritional benefits or risks with eating GE salmon, for which the consensus seemed to be that there’s not. And at the end of the conversation there was mention of glow-in-the dark fish being sold in pet stores, to which I noticed a lot of shaking heads and looks of disdain on the faces of the people in the room.

Afterwards, everyone gathered around a table to munch locally grown, non-GMO, organic walnuts and seasonal root vegetables.  “What if a plant could grow in the dark so that you didn’t have to use a whole bunch of electricity to light your streets, or you could produce cosmetic ingredients and renewable fuels from genetically modified yeast rather than harvesting shark livers or drilling for oil, or there was an abundance of rhino horn or ivory so there was no longer an incentive to poach wildlife?”  I asked, referring to technologies developed by Amyris, the Glowing Plant Project, and Pembient.  People seemed to be unfamiliar with what I was referring to, but after explaining more about these companies and their projects, I didn’t hear opposition voiced to the idea of growing fuels and cosmetics, be it in a petri dish or fermentation unit, rather than mining or hunting it.

“So how does one go about doing things right?”  I asked Adam.  “Genetically engineered food without the animals – how does one develop and commercialize it without getting sued by organizations like yours?”  Adam agreed that it was an interesting question to which he didn’t know the answer.  I can’t imagine that it’s never been asked, but I have learned from experience that the best way to get told how to do something right, is to do it wrong in the first place, because it’s better than doing nothing at all.

Ultimately, I’m hopeful.  I’ve been working to commercialize a new biofuel for the last five years, so I’m no stranger to the challenges of trying to enter a market that is very set in its ways.  For those of us who agree that conventional large-scale farming and food production practices are unsustainable and inhumane and that improvements are needed, there are some things that we can do:

I feel that new methods of food production are desperately needed and whether we’re for or against genetic engineering, cellular agriculture, or other non-traditional food sources, it’s up to all stakeholders, which is everyone since we all eat, to work together to ensure progress is made.

Kristen Aramthanapon is a scientist and entrepreneur who lives in the bay area.

Note: CUESA also wrote an article on the event 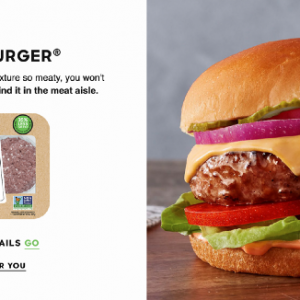 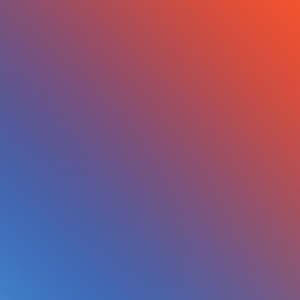 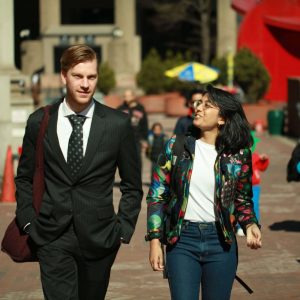 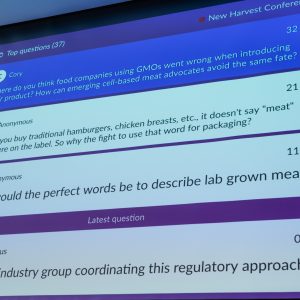