Back in the early 2000s, cultured meat was considered science fiction. As the world's only cultured meat organization at the time, our work boiled down to: How do we get the world to take cultured meat seriously as an idea worth pursuing?

Between 2004 and 2013, Harvest was involved in a series of initiatives that ultimately culminated in a historic tasting of the world’s first cell-cultured burger, developed by Mark Post at the University of Maastricht. This burger, cooked and tasted on live television, proved to the world that cultured meat is scientifically possible.

The 2013 burger tasting directed unprecedented media attention to the concept of cultured meat, providing a necessary proof of concept for future funding and the formation of companies.

In 2016, Mark Post co-founded Mosa Meat. Inspired by their time in the lab during the burger development, two of Mark Post’s students went on to launch their own careers in cellular agriculture.15

15Andrew Stout, a visiting undergraduate student in Mark Post’s lab during the burger creation, became a New Harvest Research Fellow in 2017. Daan Luining, a master’s degree candidate in Mark Post’s lab, interned at New Harvest and then founded his own cultured meat company, Meatable, in 2018. 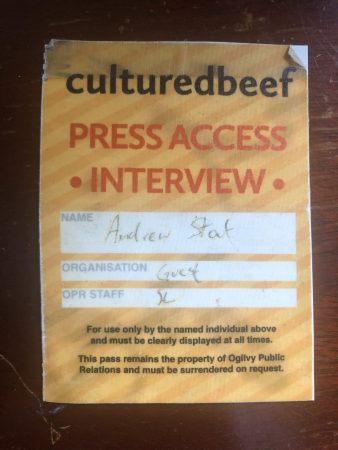 Nametag from the London tasting of the world’s first cell-cultured burger. (Photo by Andrew Stout) 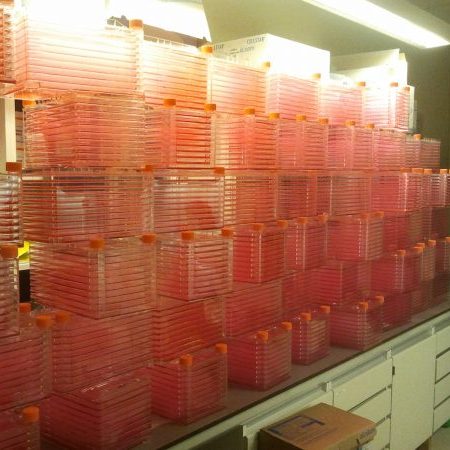 Ten-layer tissue culture flasks from Mark Post’s lab used for making just a portion of the cell-cultured hamburger. The entire patty took many more culture flasks than what is shown here. (Photo by Daan Luining)

November, 2015 – New Harvest publishes a blog post about the research leading up to the 2013 burger.

August, 2013 – The world’s first cell-cultured burger is cooked and tasted live on BBC, proving to the world that cultured meat is scientifically possible. The burger is developed by Mark Post and funded by Sergey Brin.

2010 – Google co-founder Sergey Brin’s family foundation reaches out to New Harvest asking which labs to support in order to advance cultured meat. We direct the foundation to Mark Post.

2007 – New Harvest grants $7,000 to Henk Haagsman, the principal grant writer for the Dutch In Vitro Meat Project. Included among the other team members in the project is Mark Post, who eventually develops the 2013 burger.

October, 2004 – New Harvest founder Jason Matheny speaks with the Dutch Minister of Agriculture about cultured meat. This conversation plays a key role in inspiring the Dutch government to fund the Dutch In Vitro Meat project from May 2005 until April 2009.

In order to see our vision of a more just, equitable, and humane food system one of our key strategies is to default to open. By creating an open cellular agriculture repository on Zenodo we ensure that the research produced by New Harvest and other researchers is accessible for all to use, read, share, and build upon. In that way we are increasing the impact of this crucial knowledge by furthering its reach.

Because growing meat through cell culture is so novel a process, many questions about the safety of cell-cultured meat and seafood products remain unanswered.

This industry-wide initiative was designed in partnership with Vireo Advisors to begin a data-driven conversation about the safety of cultured meat. 50 leading companies shared previously unpublished details about their manufacturing processes which we used to create a body of publicly available information about how cultured meat is produced and what safety hazards might be introduced along the way.