Building food with biology opens new possibilities. Gelzen is making custom materials, like designer gelatin. Here is a peek at a gummy candy the Gelzen team made with mastodon gelatin.

More likely than not, gelatin is a key ingredient in many of your favorite foods. It’s used in sweets like gummy bears and marshmallows to create their unique texture. It’s used as a thickening agent in yogurt and cream cheese. It’s even used to clarify drinks like beer, wine, and apple juice. The use of gelatin is so widespread, in fact, that the market for its production and sale is estimated at $2-3 billion dollars per year.

But the process by which this highly versatile ingredient is made is far from ideal. Gelatin is made from collagen – a protein that is extracted from the skin and bones of cows and pigs left over from the factory farming process. And its production is therefore plagued by all the drawbacks of large-scale animal agriculture: inefficient production, antibiotic overreliance, and animal suffering.

Alex Lorestani and Nick Ouzounov formed Gelzen to create a better gelatin – by building it with biology instead of animals. Instead of growing an entire animal, pulling it apart, and extracting the collagen, Gelzen takes the same feedstock  – sugars and other inputs that the cell uses to manufacture proteins – and combines them with microbes in a fermenter. The result is gelatin that is bio-identical to traditional gelatin – without all the negative consequences of large-scale animal agriculture.

This process results in a more efficient and humane gelatin, and also one that is just better. Not only can Gelzen make gelatin that is bio-identical to traditionally produced gelatin, they also plan to make new types of gelatin that can be used in entirely new ways. For example, gelatin today is primarily measured by its stiffness, with jello relatively less stiff and gummy bears relatively more stiff. But using cellular agriculture to produce gelatin opens up new varieties of stiffness that can’t be created with traditional production methods. And by exploring these new varieties, Gelzen plans to unlock not only new opportunities in traditional markets like desserts, but also entirely new possibilities (for example as binding agents in breadmaking.)

Nick and Alex met at Princeton as graduate students in the Department of Molecular Biology. Nick was a pure PhD student studying biophysics and cell biology, while Alex was an MD/PhD student interested in infectious diseases, and in particular antibiotic resistant bacteria.

Having learned that 70% of the antibiotics we use are deployed on animal factory farms, Nick and Alex became interested in cellular agriculture and the protein production problem – specifically, how can cellular agriculture be used to make proteins at scale? They decided to use their expertise in synthetic biology to take on this challenge and applied to Indiebio, the world’s first synthetic biology accelerator.

They quickly focused on building gelatin, due to its wide usage, the lack of acceptable alternatives, and the attractiveness of the scientific challenge.

“One of things that’s really nice about collagen is it’s a very elegant molecule,” Alex says.  “And it’s is very well understood and it’s been studied biochemically for decades. So we could really turn something that would otherwise have been a basic science problem into an engineering problem. We know how this molecule works, we know what we need to do to get it made – so we can focus on the production problem. And that’s important in the beginning because you need to solve fundamental problems first. And then you can move onto very complex ones.”

Gelzen makes their gelatin using recombinant protein production technology and has successfully produced gummy bears using their recombinant gelatin. And since building food products with biology instead of animals allows Gelzen to produce custom collagens, they produced an early prototype using the collagen sequence of the long-extinct mastodon. The company will deploy this process to manufacture designer gelatins at a large scale.

The company is currently building out its lab and production facility and has recently hired an elite fermentation scientist to be Gelzen’s Director of Fermentation Development. The company’s current focus is on scaling the production process and though their initial focus is gelatin, Gelzen also plans to tackle other proteins in the future.

Written by David Leibowitz with input from Alexander Lorestani, March 30, 2016 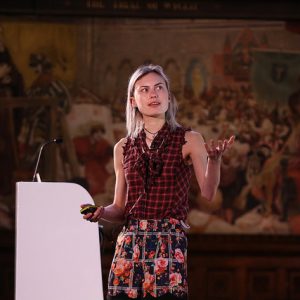