New Harvest is supporting a foundational cultured avian tissue research project for the purpose of creating chicken and turkey meat without animals at the College of Agriculture and Life Sciences at North Carolina State University. The project is led by Dr. Paul Mozdziak, an expert in animal cell culture techniques, transgenic animal production, and muscle biology. He is assisted by graduate student Marie Gibbons. New Harvest’s financial support to the team at NCSU will total $118,800, provided over 2 years. 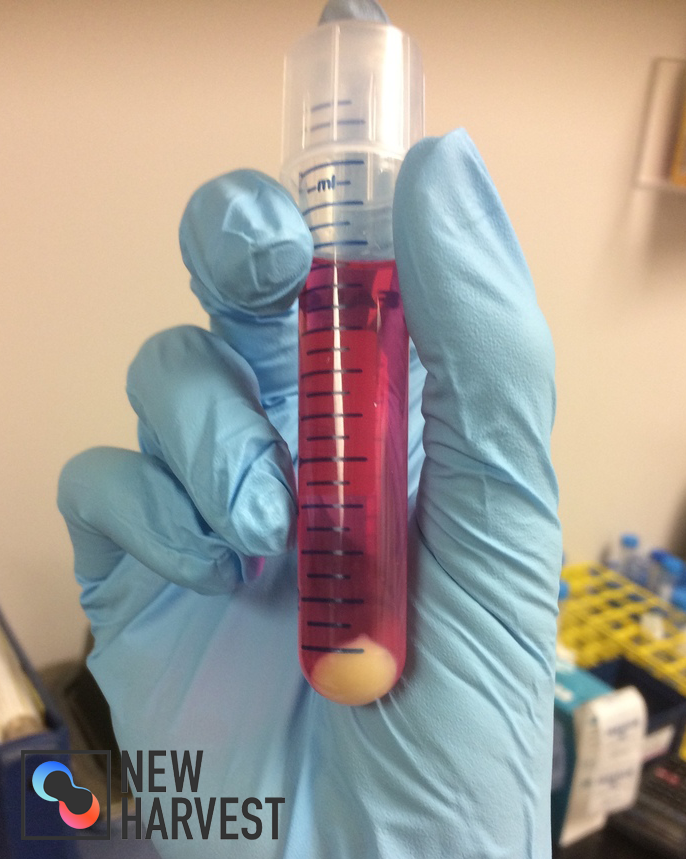 Less than 7 months into the project, Marie has been able to create a “nugget” of cultured turkey muscle! As an initial step towards the broader goal of culturing chicken and turkey meat, Marie and Dr. Paul are focusing on creating an open source line of avian cells for food production. In the course of this work, however, enough muscle cells were able to be set aside to produce a small mass of pure turkey muscle, as shown above!

A primary culture of turkey muscle cells. When Marie sent me this photo it was called “thats_no_moon.jpg” I did not get it. (Turns out it’s a Star Wars thing.)

Marie Gibbons wanted to be a veterinarian. When she emailed me about getting involved in cultured meat research, I couldn’t help but notice the wealth of experience she had in veterinary work. She had worked hands on with goats, sheep, horses, cows, pigs, llamas, zebras, cats, tigers, wolves, chimpanzees, gibbons, binturongs, squirrels, turtles, rabbits, dogs and bears at 17 different animal care organizations, doing everything from stool sample tests and x-rays to exotic pet care and cesarian sections.

So I was a little surprised when I heard that she wanted to switch gears and pursue cellular agriculture research, with a focus on cultured meat.

Marie insisted that this is what she really wanted to pursue, that this type of research would solve a problem that veterinary work couldn’t — and with an enormous potential for impact.

Marie connected me with Dr. Paul Mozdziak, a professor at North Carolina State University (where Marie was studying) who Marie had connected with. Dr. Paul, as we came to call him (“It’s a Southern thing,” he said), is a world expert in animal cell culture. In particular, in avian cell culture, which includes chickens, turkeys, ducks, and other poultry species. Dr. Paul Mozdziak and his graduate student, Marie Gibbons, who are working on establishing the first accessible avian muscle cell line for the production of cultured meat.

It was thrilling to hear from Dr. Paul. This was one of the first messages we received from him:

I have been thinking about the problem [of cultured meat] for a very long time, and I have engaged engineering professors at NCSU to discuss scaffolds; the issue is that USDA competitive grants are not going to fund in vitro meat production since they only fund mechanistic hypothesis driven research, and the poultry industry at this point is not interested in funding research on biomanufactured meat. The only place that would even consider funding the work is New Harvest.

I have wanted to do this project for almost 20 years. I am very excited about the possibilities. After a series of phone calls and Skype sessions, we decided that the most impactful work that we could support at Dr. Paul’s lab would be his work in establishing an avian cell line, and adding it to a cell library, so that researchers around the world would have access to avian muscle cell lines.

Here’s the thing. If a researcher today wants to do work on cultured meat, they must visit a slaughterhouse, collect samples from a freshly slaughtered animal, and spend approximately 3 months establishing a cell line from the sample. This is a huge barrier for any researcher wanting to pursue cultured meat work. By contrast, if someone wanted to do work on a human cell line (or even Chinese hamster ovary cells), they would simply have to open up a catalog and order them.

As New Harvest’s goal is to establish the field of cellular agriculture, we believe it would be incredibly impactful to make avian cells as easily accessible as they can be. Dr. Paul in his lab, looking at avian muscle cells.

These are descriptions of the work carried out by Marie and Dr. Paul.

This study aims to create an efficient method of culturing avian myoblast cells on a large scale, leading to further research in the field of cellular agriculture. In order to accelerate further research, Dr. Paul and Marie are establishing an immortal turkey myosatellite cell line for ATCC deposit. Making these cells available for public use will allow researchers to forgo the difficult and time consuming process of obtaining tissue from an animal and maintaining cells over several months to prove immortality. Once cultivated for primary culture, cells must be maintained for 40 to 60 cell divisions in order to determine their immortality: [iv]

6. Passage cells to new flasks once desired confluency has been reached

7. Freeze and store cells in Nitrogen tank for ATCC deposit

To retain immortality, myosatellite cells must be kept at optimum conditions throughout the culturing and storage process. Many factors such as contamination and changes to their environment or feeding schedules can lead to cell death. Cells must reach certain confluence before being frozen into individuals, and appropriate cell confluence must be maintained during cell culture. Plating cells at less than 5% confluence will result in clonal cell growth, while allowing cells to reach more than 90% confluence can lead to resource competition and cell differentiation. Photos taken at 100x magnification.

Optimum proliferation with minimal differentiation was maintained when cells were kept in incubation at 37.5 C and exposed to a constant flow of 5% Co2. Once plated with gelatin and Turkey Plating Media, cells are incubated in T75 flasks. 20ml of fresh Turkey Growth Media are added to the flasks every 48 hours to promote proliferation without differentiation, until cells are ready to be frozen down.

A master cell bank will be ready for deposit in Fall 2016.

Further research aims to determine how to suspend large quantities of muscle cells in a bioreactor, and to explore plant based alternatives for the culturing process.

Dr Mozdziak holds a B.S. in Animal Science with Honors and Distinction from Cornell University, a M.S. in Meat Science, and a Ph.D. in Muscle Biology. Dr. Mozdziak has extensive knowledge and 24 years of experience in turkey muscle cell line culture and sensory property evaluation. Dr. Mozdziak developed on of the initial courses, and currently teaches animal cell culture methods. He has a robust research program focusing on embryonic myogenesis, satellite cells, muscle regeneration, and avian physiology. Dr. Mozdziak has also taught courses regarding bioreactor scale cell culture and cell line development. While working with a variety of cell types, he has contributed to over 70 publications involving poultry science, muscle biology, and cell culture. For almost 20 years, Paul has hoped to pursue research in cultured meat and has been restricted only by a lack of funding in the field. New Harvest’s Support provides the opportunity to contribute to this research, and he is very excited to be involved in the development of avian muscle for the purpose of meat synthesis.

Ms. Gibbons obtained her undergraduate degree in 2014 and has 9 years of laboratory experience in both educational wet lab and veterinary settings. Ms. Gibbons’ schooling introduced her to the fascinating chemical and biological microscopic processes involved in biological synthesis and function, and she hopes to continue her studies by focusing on tissue engineering. While working in the veterinary field, she gained diagnostic laboratory skills including bacterial and fungal cell culture, microscopic differentiation, sterility techniques, and data collection methods. As a farm animal veterinary technician, Marie was exposed to the negative impacts animal agriculture has on the environment, public health, and animal welfare. These experiences have motivated her to help revolutionize the animal product industry, and she is eager to apply her interests, skills, and passion to the research of cultured meat.

In vitro meat culture offers a solution to unsustainable meat production while still providing animal products to our growing population. Cultured meat research has already begun but is faced with many obstacles. Common problems include the availability of cell lines, efficient production of cells at a large scale, and cell growth using plant based media and scaffolds. This research aims to address these issues by generating muscle cell lines that can be scaled up in a bioreactor and exploring plant based materials that can be used to grow these cells. White meat is an ideal material for meat culture due to its anaerobic activity, low fat content, and plasticity.[i],[ii] Dr. Mozdziak has been cultivating turkey satellite cells and myoblasts since 1992. North Carolina State University will derive cell lines either from existing clonal or mass cultures that Dr. Mozdziak has generated, or from primary culture. Subsequently, the cell lines will be adapted to suspension culture, while retaining their ability to differentiate into myotubes on a solid, plant based substrate. A shift from animal agriculture to lab-based products can potentially reverse global warming, decrease foodborne illnesses and environmental pollution, and spare billions of animals. This study aims to establish an efficient method of culturing avian myoblast cells on a large scale, leading to further research in the field of cellular agriculture.

We are continuing to receive updates on this project, which will be uploaded here. Stay tuned!

[i] USDA. 2008. Fresh Pork from Farm to Table. [2013; 2016]. http://www.fsis.usda.gov/wps/portal/fsis/topics/food-safety-education/get-answers/food-safety-fact-sheets/meat-preparation/fresh-pork-from-farm-to-table/CT_Index