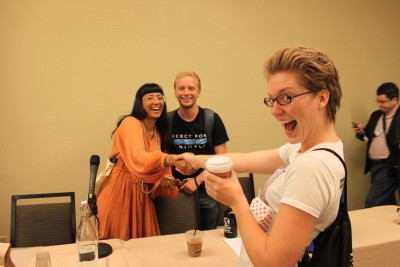 One prominent activist called cultured meat “the best chance we have at saving animals over the next few years.”

Just got back from LA, at my first Animal Rights National Conference. Months back, Sherrie, a long time dedicated New Harvest volunteer recommended that I sign up to speak at this year’s conference. Upon landing I couldn’t help but ask myself how I ended up at an animal rights conference. My apologies to Matt Ball, but I think I’m the accidental activist!!

When I first got into cultured meat, it was because of the environmental, unsustainable atrocities of factory farming. Yes, I knew that the ethical question was there but it was not the main priority for culturing meat, for me. Now I see it’s as strong an argument as any other for the end of factory farming.

It was completely eye-opening for me to see the important work that is done by undercover factory farm workers who film the inner workings of these horrible farms in order to blow the doors open for change. It was amazing to see just how much you can do without eating meat, from being an NFL football player, to being a kid born via a vegan pregnancy.

I was curious to see what the reception was going to be to cultured meat, given that you really do not experience any kind of physical limitations for living a plant-based life (the only limitations are perhaps societal).

The response was overwhelmingly positive. There were converts too, after hearing about New Harvest’s activities and non-profit status. One prominent activist called cultured meat “the best chance we have at saving animals over the next few years”. I have to say, I couldn’t agree more!

I was thrilled to have a chance to thank Ingrid Newkirk, co-founder and President of PETA, for a recent donation to New Harvest and her support for cultured meat in general. She said she was excited to see all the new alternatives coming out in the near future. (Then I kicked myself for not taking a photo).

Which leads me to another revelation: should we be calling cultured milk, cultured meat alternatives? I mean they are literally THE REAL THING, the only thing different is that nothing with a face had to die or suffer in the making of it. Plant-based products I suppose are alternatives, but even that I wonder about, especially considering how Beyond Meat calls their products meat. I mean technically, meat doesn’t mean flesh, it just means food!! I had a great time speaking. I have to admit I left it until the day before to make the talk, primarily because I wanted to get a feel for what I could tell the audience that would be new and exciting. I noticed a lot of “old information” being shared at the conference, and I wanted to be sure to come in with a ton of stuff that no one had ever seen before, but still be introductory enough for newcomers. I made sure to refer to some prominent people in the movement and their opinions of cultured meat, and to share what New Harvest DOES, which isn’t the most straightforward thing. I think I did a pretty good job. You can check the slides I made in the post below!

I have to say the thing I liked about AR2014 the most was being there with three New Harvest community members, Natalie Rubio, our summer intern; Erin Kim, and Sherrie Tullsen-Chin. New Harvest is becoming a really lovely, interesting and inspiring group of people and I couldn’t be happier. I can’t wait to see the New Harvest team grow!!!!

And with that I think I’ll pass it on to Natalie to share her thoughts!! It’s all yours, Natalie!

ARC2014 was my first experience at an activist conference! I couldn’t help but compare it to the other conferences I have attended- which have all been related to a university organization of which I am involved in- the International Society of Pharmaceutical Engineers (ISPE). At these events, speakers present on topics such as cleaning validation protocol and FDA regulations… needless to say, very little passion in these talks. The booths are dominated by white men in suits who casually discuss their various bioreactor designs as they take advantage of the open bar.

By contrast, each and every speaker at ARC had immense devotion to their respective causes, and most speeches were met with standing ovations by the equally passionate audiences. It was amazing to be surrounded by so many inspiring and selfless people. The exhibitions were engaging and informative- my favorite discoveries were the vegan donut company Donut Friend and the Beagle Freedom Project, where I met a rescued beagle named Timmy Honestly, I was quite apprehensive about attending ARC as a representative of New Harvest. Perhaps I read too many internet comments, but I had the perception that many in the animal rights community despised the idea of cultured meat. I have even heard opinions of extreme activists that oppose plant-based substitutes designed to resemble the shape of meat! So, I was quite apprehensive on the first day I arrived. However, from the first interaction Erin Kim and I (we spent a day before the conference exploring Beverly Hills) had with the bellhop- introducing New Harvest and the concept of cultured meat- the reactions were positive. We handed out business cards to waiters who were intrigued by the idea, and even encountered a casting director who seriously wanted to find out how he could get on a list to culture his own cells.

At the conference, activists agreed that a cultured meat and dairy industry would be highly beneficial to the cause, reducing suffering of farm animals and acting as a step towards total animal liberation. The few polite concerns were: how many animals will be needed to supply biopsies? How often will biopsies have to be taken from the donor animal? Isha was met with great applause when she addressed in her panel, that one cell can theoretically divide 1 trillion times, and as science progresses even donor animals may become unnecessary. Isha’s entire talk was so inspiring! A few people even told us that we had completely changed their opinion on the subject.

Another common question- when will cultured meat be available? (Some people had the misconception that cultured meat already exists on the market.) We conveyed that while the estimate timeframe is seven to ten years, what really matters is getting funding and having more researchers working on the topic.

After making great connections with animal rights activists, New Harvest folks will have to sit down and think about how we can utilize this powerful community to help advance our mission (and theirs). I hope I get the chance to return next year, when the conference will be in Washington D.C.! I can only imagine what successes New Harvest will have to share by then. 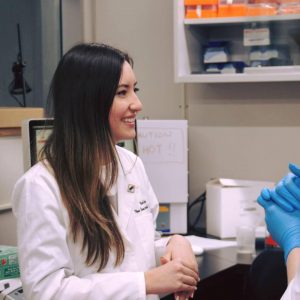