The awardees research aligns with one or more of the following global themes:

To undertake this research, Abi will be crossing the pond to study under Dr. Andrew Pelling at the Pelling Lab in Ottawa, Canada in 2017!

Abi describes what this work will entail in her entry for the New Harvest blog. 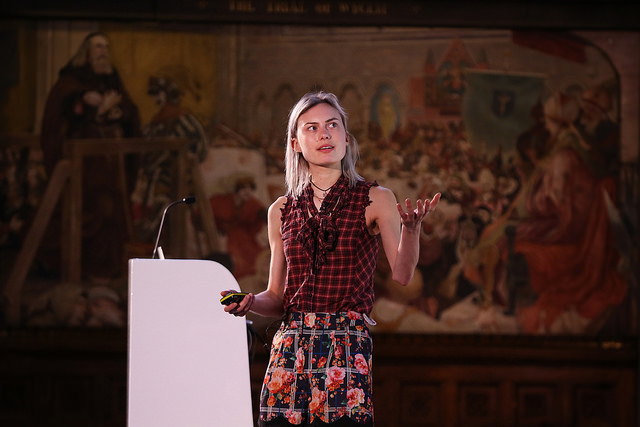 My research thesis ‘The In Vitro Perfusion of Thick Bovine Muscle Tissue’ covers elements of cell manipulation, biomaterials and tissue perfusion which perfectly complements the Pelling Lab expertise. My time can be used to continue my research from King’s which has encompassed using waste materials to form tissue engineering cell scaffolds and creating a perfusion network within thick tissue, plus I can share the knowledge I have gained with the current lab members and hopefully aid in development of their research too.

Cellular agriculture is the production of animal products from cell cultures rather than directly from animals. My project focusses on the perfusion of thick bovine muscle tissue, this is a new field in tissue engineering which holds novel avenues in food and medical science.

This project covers several of King’s College global themes. Food security namely resilience, sustainability and supply is becoming increasingly important as outlined by the Global Food Strategic Plan 2011-2016[i]. We are facing population growth, have limited agricultural resources and are increasingly at the mercy of the variable environment.

Cellular agriculture offers a more stable source of protein than conventional animal agriculture by: decreasing the possibility of food borne and animal pathogens[ii], reducing land requirement and the eutrophication potential[iii]. Additionally this technology could be integrated into current eco-agricultural practices and aid in the revitalization of agriculture and rural communities.

As an inquisitive student, I have unconventional research ideas and have to explore novel tissue engineering avenues. Ideas that often can’t easily be articulated or explained but come through artistic or intuitive inspiration often lead to discoveries.   However, the foundation of all exploration is based on retaining a scientific perspective to substantiate qualitative data and quantify scientifically these phenomenon.

The Laboratory for Biophysical Manipulation led by Dr. Andrew Pelling, an experimental scientist and TED Fellow who runs his lab under the motto ‘be curious’ at the University of Ottawa, operates a group whose main purpose is to take these unconventional ideas, test them and interpret the outcome.

I will be studying at the Pelling Lab, University of Ottawa under Dr. Andrew Pelling from 9th January – 27th March 2017. This apple scaffold carved in the shape of an ear (on which animal tissue, including human tissue, can grow) was created at the Pelling Lab!

The Pelling Lab is an openly curious and exploratory space in which scientists, engineers and artists work together. They draw upon cells innate ability to respond to stimuli in order to create biological systems inspired by the world around us but that have never before been seen. This ties in incredibly with cellular agriculture and cultured meat as we are removing cells from their native environments and culturing them in a mimic but not a replica of their natural environment in order to create a new type of meat.

A melting pot of scientists, artists and designers the lab openly encourages inquisitiveness and has the infrastructure to support the creation of functional living systems never before seen in nature yet inspired by the world around us. With a team whose knowledge spans from physical biohacking to tissue engineering in health and disease, there is an array of projects to be involved in and expertise to draw upon from physicists, biologist, artists, anthropologists and more.

My time at King’s is teaching me skills to be a well-rounded and proficient scientist, however I feel that a period in this lab would nourish and stimulate my creativity while encouraging my scientific reasoning.

Studying at the Pelling Lab will assist in progressing my understanding of cell biology and manipulation; how in-vitro environments form complex and previously unseen biological entities; and how tissue engineering can be made accessible and relatable to the public. The knowledge and skills I would gain could be translated back into my KCL group’s research on biomaterials, stem cell approaches to tissue engineering and mimicking the biological niches in health and disease and further their research.